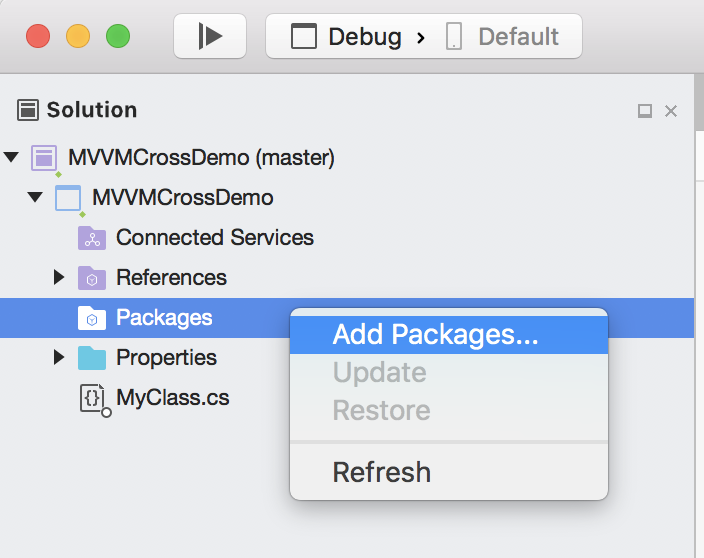 In the development of a Xamarin platform based mobile application, the MVVM is a commonly used design pattern. Well, this MVVM design pattern which is actually used in the development of a device based mobile app structure like WPF, Xamarin Silverlight, etc. Here, with the source f this blog post we will let you know a simpler way to easily implement the MVVM design pattern in a Xamarin Forms application along with the proper use of a well defined third party as MVVM Library. So, if you are also in a path to build a new app for your business then this post will help you more to implement the app with the amazing MVVM cross library features

What is MVVM Crossin the world od web app development under the environment of Xamarin Forms technoloMVVM is considering as the third-party library for the better implementation of code elements in the design part of the Xamarin application. By using the NuGet we can hassle-freely install this third party library in our project. Using the MVVM design pattern in an app we can have the three main important parts of the application that are:

That simply indicates that if we do something on View then, the ViewModel will come tp know about that activity and grant s permission to run the Model in order to fetch the required information. While once it gets all the required information successfully, it comes back and notifies the view about it. In most simple terms, we can also assume the ViewModel as a strong and responsible bridge for every articular activity in the application.

While on the second side the View has no idea that from where and which model the date will get fetched, and likewise, the model has no clue about which particular View of the application gets called.

How to get MVVMCross in a Xamarin Application?

To implement an MVVM cross library in a Xamarin project, there are are two ways define, in which the one is Nuget while second is downloading the template.

In addition to installing the MVVMCross in a Xamarin.Forms application,, we need to use the below-mentioned commands from the command manager of the Xamarin Project:

This is one of the easiest ways to use MvvmCross in a Xamarin application, which basically requires to install the Visual Studio extension.

Now moving on the path to learning to use MvvmCross in a Xamarin.Forms project

Once we are done with all the installation process its the time to follow the below steps to simply configure the Xamarin app with MvvmCross.

While in case, if you already have a Xamarin application and are want to know that if it is using the MvvmCross and if yes, then all your need to check the project structure of your app to ensure that it is developed on MvvmCross, which is as the simplest structure as the .core explains your Xamarin.Forms project and the native project is using .Android or .iOS as an extension at the end of the project. Also here you will notice a class for CoreApp, which inherits the MvxApplication. This is how you can check that your application is well enabled with MvvmCross or not.